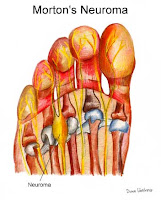 My sore right foot is offically a case of Morton's neuroma! I do not have a stress fracture (X-rays confirm the bones and joints in my foot and ankle are super healthy!). I do not have to quit running or bag my plans for a marathon. All I had to do was submit to a steroid shot in the top of my foot.

How was it diagnosed? The doctor, a whippet-like person who runs himself, manipulated the sore area, asking me if various movements hurt and testing the soundness of the bones. Then he ordered up the X-rays, and once it was clear the bones are good, he injected the foot with a numbing agent, then did some of the squeezing and prodding again to see where the pain that I could no longer feel had been centered. Once that was evident (the pain originates between the big toe and the second toe), he gave me the steroid shot right above that spot. I got excited, saying it would be great to do tomorrow's speed workout pain-free, but he brought me down a bit, saying it would probably take 24 to 48 hours to take effect.

For longer term management, I must keep wearing the neuroma pad I got at Boulder Running Company on Saturday (bless their knowledgeable salespeople, especially the one I had--I think his name was Greg).

The doc also recommends that I do some foot strengthening exercises, including using my toes to move marbles from the floor to a bowl, towel grabs and running barefoot on grass for 10 or 15 minutes a week when the weather improves (he recommended against any abrupt transition to all barefoot or minimalist running, but he said incorporating it gradually is very good for foot strength). I'm also supposed to avoid high heels (not hard since I hate 'em anyway) and tight shoes (another hate). I may also take an aspirin after my long runs to reduce any swelling. I don't want to rely on painkillers, but since I know what this is, and aspirin in moderate doses is good for most adults anyway, I don't think it will hurt.

I'm *very* happy about how the visit went. Obviously the relatively mild diagnosis is the biggest part of that, but I was also thrilled with the Boulder Center for Sports Medicine in general. All the nurses I saw were wearing workout clothes and running shoes. There was a big gym just off the hallway from the examining rooms. Posters of past Bolder Boulder races and cycling events decorated the walls, along with signed photos of athletes.

Seeing this doctor was mildly intimidating. The photo above the examining table was of a women's cycling team whose red jerseys featured the Soviet hammer and sickle. But the other folks in the waiting room looked blessedly average like me. And the doc didn't flinch or (worse) look amused when I told him about my Boston goal.

This is the place I will be going for most of my medical needs going forward, so it will be easy to slip running questions in when needed, even if the ostensible reason for the visit is a general check-up or a cough. Another reason to love living in Boulder....
Posted by Terzah at 3:49 PM