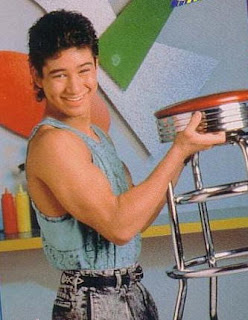 Sorry to frighten you with that picture, but I can't resist any reference to the 80s. Or I guess early 90s. I got a funny note from my sister-in-law, who's a California girl, talking about Mario's sleazy tomcat ways and how ironic it is that he's writing books for families. I'm not really surprised. But hey! I still like the book (and I'm using the library copy for now, so I haven't lined his pockets yet, though I probably will buy it).

Before I fill you in on the scintillating details of my family's first week on the Mario Lopez Extra Lean Family eating plan, let me put in another request for donations to my Run for Food/Houston Marathon fundraiser for the Houston Food Bank. Click here to donate.

OK! So...the week went well. I had gone on a mondo shoppning excursion Saturday night, stocking up with most of the things we would need for the entire week. This itself was a big change from the piecemeal grocery shopping we usually do, which is to say, Dan and I calling or emailing each other at about 4:30 p.m. with the "Any ideas for dinner?" question and then one of us beating a hasty path to the store ahead of picking up the kids. Having done the shopping was g-r-e-a-t. It made all the evenings so much less stressful. We did have to make one other trip on Thursday, to pick up some more fruit (my kids eat more fruit than Mario predicted--a good problem to have)...but I stayed out of the (expensive) organic grocery store across the street from my library all week.

The other great result: I brought all of my meals and snacks to work. I had all the kids' meals and snacks ready to go at home on the days I was with them (I can't tell you how many afternoons I've just taken them to a coffeeshop because I have nothing to give them--way too much expensive pumpkin bread consumed). And no dinners were left to chance. We didn't eat out once, any of us.

We are now geared up for Week 2. I went on this week's mondo shopping excursion last night, and this morning made a big pot of turkey chili for dinners tonight and Wednesday and some quinoa for a salad on Tuesday night (Sunday is Mario's prep day). Last night, the plan fell apart a bit as we went over to some friends' house for dinner, and I had FAR too many chips with guac, chips with bean dip and chicken enchiladas that were decidedly NOT extra lean, as well as too many of Mario's "lean" brownies (which were my contribution to the evening--and mmm, they were good). But we don't do that very often, so I figure if that's the worst I did, it will be OK.

Has my leanness (or lack thereof) been affected yet? Doubtful. I will check in with my bodyfat scale on Tuesday morning after my run and report back. Tuesday is scale day for me. I generally weigh myself both on my own at home (thus getting the bodyfat reading) and also on the one at the gym after weight training.

Regardless of what the scale says, trying this out has been great so far on a number of other fronts. I love having the meals planned, the healthy food we need bought, the guesswork removed, the restaurants and coffeeshops avoided, the spending on unnecessary grocery trips eliminated. I don't love shopping on Saturday nights, but really, since I'm at home with two sleeping kids most Saturdays anyway, it's not like I'm sacrificing great social alternatives.

Bring on more, Mario! Saved by the book!
Posted by Terzah at 5:53 PM