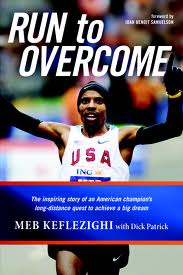 I've had this autobiography of Meb Keflezighi for a while, having won it as part of a giveaway from Erin at See Mom Run Far last fall. Though I'd dipped into it here and there, I hadn't really sat down to read it. But when I found out exactly why my back has been hurting and what it meant for my running, I knew it was time to pick it up and read it through.

"Overcoming" is something I think every runner has to acquaint him/herself with at some point. There are the usual difficulties of training. There are life circumstances. There are injuries and illnesses. There are your own demons, and, if you're really good, like Meb, there are outside detractors, too, people who think because you are older or injured that you are slowing down, that you've peaked.

Most runners out there who follow the professional side of the sport know the outlines of Meb's story: how his family arrived in the U.S. from Eritrea after his father made a harrowing trek to Northern Africa and Italy; how Meb and his brothers and sister excelled in school despite having no English when they arrived; how close-knit his family is and how important both his home and his adopted countries are to him. They also know the story of how, wanting a good grade in P.E., seventh grader Meb laid down a 5:20 in the mile run.

I was lucky to hear Meb speak just after he won the Olympic Trials Marathon in January, chalking up a new personal record in the process, and he comes across in this book much the same way he does in person: modest; religious; friendly and inspired. I loved the details, like how he hates ice baths, how he longed for his true love before meeting his wife, Yordanos, at last, how he told his four-year-old daughter that she'd have to earn her first trophy and how during one of his worst injuries he got to know the seniors doing pool aquatics while he was doing pool running nearby.

But another quality that, in person, is made manifest in his running more than his manner emerges in the book as well: this is a person who is intensely driven, eager to prove his critics wrong, someone who takes the worst circumstances (including some nasty injuries) as new inspiration for doing better than he ever has before. He writes:


Winning in life doesn't happen when you overcome just one thing--do or die. It's persevering, knowing that difficulties are bumps in the road, not the end of the world. It's continuing to do the right things, knowing your time will come. After all, you have to conduct yourself like a champion before you can ever win a championship....Whatever you do, then, give it your best. Persevere in overcoming obstacles. When you do, you'll be running to win.

Nobody's path to his or her dreams unwinds without stumbling blocks--even when you are as gifted and driven as Meb. But the unwritten postscript to this book is his triumph in January, his return trip to this summer's Olympics.

These are the words I took away from this book: Patience. Perseverance.