Before Dan and I moved out of Boulder last year, I was a great bike commuter. It was only 2.5 miles from our home to my library, and I got good at negotiating the bike path in all but the iciest of weather. My trusty steed for the commute?

Now I know some of you hard-core cyclists and triathletes may be jealous, so I thought I'd tell the story how I acquired this bike.

For much of my adult life, I got around on my little brother's old Klein. It was a wonderful bike that my brother had left in our mom's garage. When I asked him for it, he said yes. It was light and well-made....and almost big enough for me. But not quite. My brother had gotten it when he was 15, and it was definitely sized for a 15-year-old. Even with the seat jacked all the way up, I was too tall for it. My knees started to hurt when I rode it. So three years or so ago I sold it to a nice 12-year-old boy.

I've never been one to spend lots of money on either cars or bikes. To me, they are transportation, and therefore need only one quality: reliability. I kept my eye on Craig's List, but this being Boulder, where cycling is as serious as running, I almost never saw anything suitably modest. Then one day I was chatting with Lorin, the security officer at my library, and somehow the subject of my need for a commuter bike came up. He told me he had repossessed a stolen bike that no one had claimed and that might be my size. He said the police had given it back to him, so it was free for the taking.

And that, my friends, is how I acquired my sweet ride.

It's a Diamondback, a brand I've heard of, though not as fancy as my brother's Klein. But it was my size and once the gears were replaced it mostly ran fine. It was all I needed to ride 2.5 miles to work and 2.5 miles home. And you can't argue with FREE.

Now having a checkered past does mean my bike has some, um, features that you might not want in a bike. For example, the handlebars: 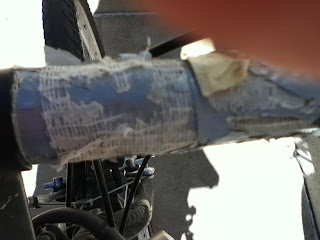 When Lorin gave it to me, the entire frame was covered in utility tape. The thief had done this to cover up any identifying markings. Dan and I did our best to remove it, but some of it will be there forever. The handlebars are also slightly crooked. The brakes are creaky--the back tire makes a swish swish sound--but they work, and that's all I care about. Finally, the replaced gear system doesn't always hold up on steep uphills and can also be quite noisy, but I figure this just makes me work harder, which I need to do anyway to keep my aerobic fitness up.

It was on this chariot that I embarked on the first long ride of my rehab this morning. It was a gorgeous day, the kind of day you see in late April when spring is well-advanced. The sun was shining, the birds were singing--and packs of Boulder County's colorfully-clad, expensively-equipped road cyclists were out there on the backroads. I had decided to join them. Two hours on the stationary bike on a day like today, where people are meant to be outside, might well have been the end of my tolerance for this "getting better" thing.

Lucky for me, my ego is accustomed to being knocked down by the athletes around here. As fleets of mantis-like Lance Armstrong dudes wearing rainbow-hued shirts plastered with sponsors' names sailed by me, my bike swoosh-swooshed (the brakes) and click-clacked (the gears). But I think I held my own (and at least I had no flat tires, which would have required a call to the sag wagon). Dan, ever my Zen master in these matters, had said "bad cyclists like us" can expect to go about 10 miles an hour. So of course I wanted to do better than that.

In the end, I put in 30 miles for the two hours. My average heart rate was only 120, the lower end of the range I'm looking for. I'll need to improve on that next week--130 would be much better. I need to find a route with less downhill. But all in all I'm pretty pleased with this as a first go at it.

My plans for this week include taking the bike to a shop for a tune-up and perhaps scheduling a "bike fit." Meanwhile, I have two questions for the veteran cyclists out there:

1) With my history of UTIs (I'm back on antibiotics; another one hit me on Wednesday morning), I'm a little worried about all this sweaty seat time and my girl parts. I changed out of my clothes and showered immediately upon arriving home. Anything else I can do to avoid problems?

2) My knees hurt a bit when I first got off the bike, though they recovered quickly and don't hurt at all now. I *never* have knee issues running. Should I be worried about that? I do not want my "cross-training for rehab" to result in another injury.

I miss running--painfully--but this is do-able. It's much better than being allowed to do *nothing.* If my PT lets me add walking to the mix, I'll feel as satisfied as a benched runner can be.

Here's an inspirational video courtesy of my awesome friend Kathy: