This was supposed to be the Spring of Speed.

But sometimes the universe doesn't want speed from you.

So you have to switch to slow. 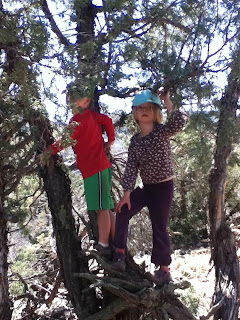 My new plan for spring (besides doing my PT exercises and recumbent bike workouts as faithfully as possible) is to take my kids for a hike every Friday morning.

Besides being fun, these hikes are doing wonders for:

1) Getting me some fresh air, which is sorely lacking at the gym. Don't get me wrong, it's a nice gym, and the 30-minute interval workouts are doing more for me than I thought they would...but gyms smell like gyms. They are artificially lit. The only breezes come from fans.

In contrast, today's trail featured bluffs 1,000 feet up from the trailhead, the bluest of blue skies, a little wind that took the edge off the July-like sun (anyone else a bit freaked out by this weather? I personally would like a little more precipitation) and the scent of sage, evergreens and a hint of the mountains that were so close we could no longer see them on the horizon as we drove up. Because, ladies and gentlemen, we were ON that horizon.

2) Getting my kids some fresh air. And getting them to explore all the trails I've been waiting five years for them to be big enough to enjoy. In mid-August, they will go to kindergarten. After that, I won't have Friday mornings with them again until they are almost six-and-a-half. And I have to say, watching my tiny slip of a daughter racing ahead of me and her brother on the trail today....it was almost as good as being able to run myself. She asked me today if she could beat me yet. I told her not yet (though of course she CAN beat me because she can run, and I can't).

3) Reconnaissance for the future: when I'm allowed to run again, I want to do a chunk of it on trails. I know road races require road training. But trail running is my true love. You have to stay in touch with the love.

A Spring of Slow was not what I had in mind, not by a long shot. But I'll take it. I think it was meant to be, for more than one reason.
Posted by Terzah at 3:29 PM