Since my blog is about to get really same-y in terms of the workouts I do (repeat three or four times per week: "Today I went and did 30 minutes with fast intervals on the recumbent bike"), and since my friend Steve's BQ story remains the single most popular post on this blog, I thought it was time to bring in some more interesting Steve-like people as guest authors.


First up is Kristy, author of Run the Long Road. Her story is one of my favorites because her first marathon, in 2004, was completed in 5 hours 12 minutes. The more she learned about the Boston Marathon, the more she wanted to qualify--but it wasn't until her ninth attempt that she accomplished her goal. In the seven years since her first 26.2, she never gave up. 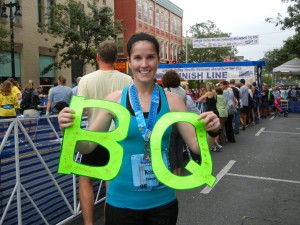 Here's her story, in her words--for all of you who think you are too slow for Boston:

Anything is possible…if you want it badly enough.

For me, qualifying and running the Boston Marathon have been dreams of mine for the past 10 years.  I’m sure people thought I was crazy talking about BQing when I was still hours (yes, hours) away from my BQ time. But Boston was always in the back of my mind during every marathon.

Marathon #1:  Marine Corps Marathon 2004 – 5:12
My goal was to finish.  I treated this marathon like a party.  I stopped and chatted with (now-husband) Matt, I stopped for pee breaks, I stopped for stretch breaks.  I seriously spent a half-hour stopping.

Marathon #5:  Philly Marathon 2008 – 4:12
Oh, I was pissed about this one.  It was 15 degrees at the start…I never warmed up and my lungs burned since I wasn’t acclimated to the cold yet.  Just awful.

2009:  I took a year off marathoning to get married, buy a house, and honeymoon in Europe

Marathon #6:  Pocono Marathon May 2010 – 4:13
I was livid about this race.  It was much hillier than I thought (this is the sole reason why I always train for the worst case scenario).  I hated the marathon and the course.  I had a great training cycle but hit the wall HARD at mile 19.  Up until mile 19, I was on track for a sub-4:00 but I fell apart mentally.  At this point I was SO SICK of finishing in the 4:1x range.

This is what I consider the biggest setback of the process.  It was the 3rd consecutive marathon where I finished in the 4:10ish range.  I was so sick of that finishing time!  I had trained hard and was really hoping for a sub-4:00.  Looking back, I should have incorporated more hill work.  Mentally, I was defeated.  If I couldn't get a sub-4:00, how was I ever going to BQ?  I took a few weeks to reassess my training as I was already registered to run Steamtown in the Fall.  I worked really hard physically but also mentally that summer.


How did I manage to shave off 30 minutes from May 2010 to September 2011?  Hard work and determination.  I’m not naturally speedy.  I didn’t run track or cross country in high school or college.  I didn’t hit the running genetic jackpot.  I’m just an average runner who dreamed big.  That’s it.  If I can do it, so can you.

Know what works for you
When I’m coaching someone, I often tell them that I made every mistake in the book so they don’t have to. I really think I did.  Lots of trial and error.  But it made me a smart runner.  I know what my body can handle and what it can’t.  I know which training plans will work for me and which ones won’t.  I know when to back off and rest and when to kick it up a notch.

Listen to your body and keep a training log.  After each training cycle and race, jot down what worked and what didn’t.  Review often and look for any patterns.

Marathon-paced long runs
I love me some marathon-paced (MP) long runs!   I wrote a post explaining my reasoning for not doing long, slow distance (LSD) long runs here.  LSD does not work for me.  I gave it a fair shot.  My coaching certification is through RRCA and they heavily stress LSD long runs for everyone – beginners to elite.  I 100% agree with LSD long runs for beginners who need to build an adequate endurance base.  But, if you have a time goal in mind, you need to incorporate some MP miles into your long runs.  For the simple reason that practice makes perfect.

Speed work (FIRST training plan)
I used the FIRST training plan for my last 2 marathons (with modifications – I added in some easy runs for more mileage).  I definitely credit it with helping me BQ.  Before the NJ Marathon, I went to the track here and there but I wasn’t consistent.  I’ve now been doing speed work consistently and the results are astounding.  My marathon pace dropped significantly.  And I saw results quickly.

Consistency is key here.  Pick a day each week and dedicate it to speed work.  It’s easiest to do on a track but any flat, paved path (free of traffic) will do.  And don’t think you have to run all-out…that is a misnomer. You can do intervals at 10K or half marathon pace.  For my final weeks leading up to the Lehigh Valley Marathon, I kept my intervals at 10K pace because I found myself overstriding (and subsequently hurting my hamstring) when I did intervals at 5K pace.

2-week taper
This training cycle was the first time I experimented with a 2-week taper.  And I will never go back to a 3-week taper again!  For me, it’s more mental than anything.  I had a good 22-miler 2 weeks before the LVM.  The day of the race I kept thinking that all I had to do was repeat the run that I did only 2 weeks before.  It boosted my confidence significantly.

Before you try a 2-week taper, think about how long it takes you to completely recover from a 20 mile run. If it takes awhile, I would err on the side of caution and stick with a 3-week taper.  You don’t want to have any lingering effects of that last 20-miler come race day.

Train for the worst case scenario
I learned this the hard way during the Pocono Marathon.  Know the marathon course.  Look at the elevation profile.  Ask people who ran the race in previous years (sidenote:  take their advice with a grain of salt.  A big hill to some is a little hill to others and vice versa).  If there are small hills, train for big hills.  It will only help you come race day.

Now for the mental part…

Break it up into small chunks
When I started to get closer to my BQ time, I looked at each marathon as a way to inch closer and closer to my ultimate goal.  My goal for Steamtown was to break 4:00 hours.  Then my goal for NJM was to hit 3:50…and finally BQ (3:45) at LVM.  This made it much more manageable and less daunting.

Be present
This tactic worked well for me at LVM.  Instead of thinking ahead to the later miles (i.e., the last 6.2), I forced myself to focus on the current mile and mastering it.  It can get overwhelming to think of how many more miles you have and how you are going to maintain MP, blah, blah, blah.  It’s a vicious cycle of self-doubt.  If you find yourself going down this road, snap out of it (during the LVM I audibly said “stop”) and regain your focus.
Posted by Terzah at 12:50 PM