An Updated Image...and an Old Dog Learns a New Trick

I have a new banner on my blog! My talented little brother, John Ewing, was in town today hanging out with Will, Ruth, Dan and me. He's a camera operator and set electrician, often for reality TV shows (Ludo Bites is the one he's currently working on, and it's what brought him to the Denver area; Dan and I are hoping to get a reservation for whatever Ludo cooks up). John is also a good artist. He was sitting at my kitchen table today and drew the sketch above in about five minutes. He can do things that are much more ornate, but this is exactly what I wanted--humble, geographically accurate--and a perfect image of the type of challenge I'm facing. Thank you, John!

A New Trick: My boot camp instructor, Chris, sometimes likes to shake things up by having our class engage in activities that you'd associate more with playing than exercising, like shooting baskets and jumping rope (not that either of those things isn't exercise, which is his point). Today he threw in hula hoops. 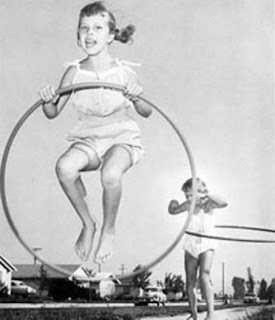 I am terrible at things like hula hooping, and actually I'm terrible at anything that resembles dancing or requires coordination and grace. Aerobics classes are useless for me because I have to concentrate so hard on the moves and the steps that I never really start breathing hard. So when Chris pointed us over to the brightly striped hoops I figured I'd just get through it and then move on to the next exercise.

I always try...but in the case of hula hooping trying has always meant failing. I picked up my hoop--a pink and green striped number--and began to swivel my stiff hips in a way that someone unkind but honest might describe as geriatric. Of course the thing clattered to the hard gym floor within, oh, about 3 seconds. If I had to save my neck by charming the Sultan with sultry belly dancing, my head would long ago have been separated from my body. But since nothing so vital was at stake, I picked the hoop up and tried again. And again.

Then a funny thing happened. Chris told us to change our stance, and put one leg forward and the other back. Maybe it was the stance change. Maybe it was the doo-wop CD playing in the background. Maybe some child spirit from the 50s possessed me. Whatever it was...I suddenly GOT IT. Suddenly, it was fun.

When class was over, after everyone else had left and Chris was cleaning up the equipment, I asked him if I could do some more hooping. I wanted to see if I could repeat the experience. I could! It was so much fun, I think I might buy one.

It's a feeling I've had three other times in my life. One was that moment when, at the relatively mature age of six, I suddenly found myself pedaling my two-wheeled bike without either training wheels or my dad's steadying hand behind me. The third time was in my early thirties in a yoga class, when I found myself balancing my knees on the backs of my arms in a crouched-down pose called the Crow.

The second time? When, at the age of 22, I crossed the finish line of my first race, a 10K in Central Park that at the time was called the Advil Mini-Marathon. Before that time, running had been a sort of drudgery for me--drudgery I was faithful to, yes, but not something I ever dreamed I would call fun, inspiring, vital. After that day, it was a whole new deal.

Probably I'm lucky to have experienced this feeling of unexpected success four times in my life. But I'm still hoping for one more time, the biggest and best of all: the time when I cross the finish line of my BQ marathon, whatever and whenever it may be. Reading the blogs of those who are getting ready for Boston in just a week and a half has been reminding me of the Big Picture, which I sometimes forget among the daily details.

I'm going to buy a hula hoop so that a) I remember that anything is possible and b) I don't forget how to do it!

Weight Update: Something is working! Despite continued dalliances with black licorice, my weight this morning was 133.8, the lowest it's been since the nauseated days of early pregnancy five years ago.
Posted by Terzah at 6:55 PM